To complete this tutorial, you should be familiar with starting a new project and the concept of Docker.

You'll create a new release in your project and deploy the Application part via Docker.

You can deploy your Application with different methods based on your current Project setup:

Once you're happy with your changes in your Telestion Project, it's time to release a new version.

Head over to your GitHub repository that contains the Telestion Project and take a look in the pull request section.

As you can see, the release.yml GitHub workflow automatically created a pull request that is ready for your review. 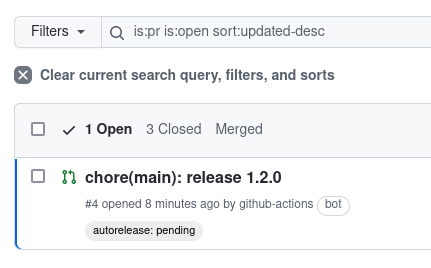 Open the pull request and review the changes.

Link to The overview page of the release pull request 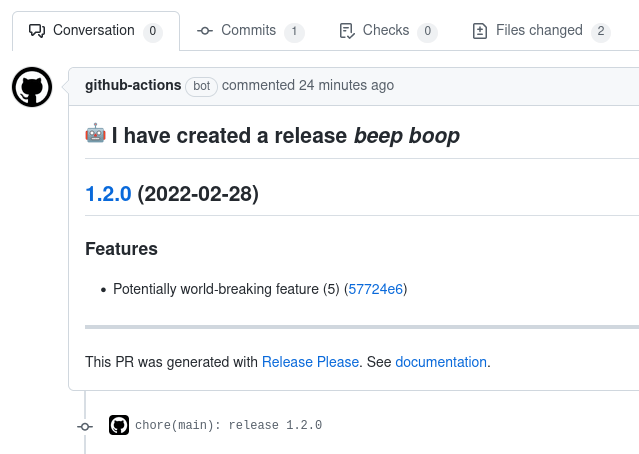 The GitHub action can only detect your changes if you're using Conventional Commits in your repository.

It then bumps the project version based on Semantic Versioning.

If you satisfied with the changelog and the new project version, merge the pull request.

You can overwrite the Semantic Versioning behavior by pushing a empty commit containing the version number:

This triggers the release.yml workflow and changes the release version to your preference.

The merge commit triggers the release.yml workflow again which in turn builds and pushes the application to the GitHub Container Registry.

To run the Telestion Project on your production system, you need a setup archive.

Head to the latest release via the link on the project metadata.

Link to Metadata sidebar of the GitHub repository

Link to GitHub's release page with the uploaded artifacts 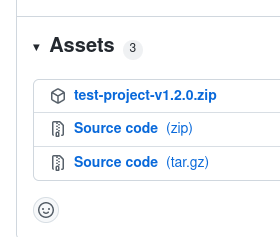 Go to the deployment section of this tutorial.

Deploy on your production system »#deploy-on-your-production-system

Next, open the console and commit the version bump:

The deployment scripts and tools require that you use the Semantic Versioning release style in your project.

Before bumping, you may look at your commit history with:

And decide based on Conventional Commits to which version you might bump.

Before pushing the release image to docker, you need to build the Application part.

Open your IDE and select the assembleDist task in the distribution section of Gradle.

Or run the Gradle task in your console:

The script asks if things are unclear or if it can't recognize anything automatically.

The deployment script uses the Docker CLI to push the images to specified Docker registry. You probably need to login before you can push the images.

Take a look at the Docker login reference on how you can login in the console.

By default, the script pushes the images to the Docker Hub, the official Docker registry.

If you would like to push to a different registry instead, use the --docker-registry <registry-uri> flag to specify the Docker registry explicitly.

Now, the Docker images are available on your preferred registry. You now need to create the setup archive you can then deploy on your production system.

Open the console and run the create setup script:

The script asks if things are unclear or if it can't recognize them automatically.

It creates a setup archive and place it in the build folder which resides in the project root.

Deploy on your production system​

Before running Telestion on your production system, you need a working Docker and docker-compose installation.

You should received a copy of the setup archive of the Telestion Project you want to deploy.

Copy it to your production system and extract it via:

Head into the folder which contains the docker-compose.yml and start Telestion:

In this file you can define which Docker images run on your production system, which ports it exposes, etc.

This downloads and starts the required components to run Telestion.

If you want to stop Telestion, call:

You can configure the deployed Telestion Project with the configuration files in the conf folder beside the docker-compose.yml and restart it if you like.

You might also want to use a graphical interface to interact with the running application.

Take a look at the tutorials for the Web Client: